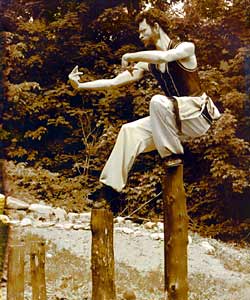 Praying Mantis style Kung Fu is believed to have originated in China at the Shaolin Temple during the early to mid 1600’s. As legend has it a young monk by the name of Wong Long was the first individual to fashion a Kung Fu fighting system after the movements of a Praying Mantis.

Wong Long reputedly began his studies at the Shaolin Temple as a young boy. As a young trainee he worked hard and made good progress. As a young man he received permission to box, or spar, with his fellow students and with his teacher, the Abbot.

It was during this period that Wong Long hit a slump, unable to advance beyond a certain level with his fighting ability. Frustrated with his performance Wong Long determined to train harder, but to no avail. He began practicing in seclusion, and one day happened upon a Praying Mantis engaged in battle with a much larger Cicada. So impressed was Wong Long with the novel fighting techniques of this Praying Mantis that he captured it and kept it in a bamboo cage. He studied the Mantis closely, mimicking and adapting the insect’s fighting abilities into his own training regime.

Once Wong Long felt confident with his command of this new fighting style he challenged his Abbot to a match in order to test his new skills. In the past, the Abbot had always defeated Wong Long quickly and easily. However, Wong Long was now able to fight to a standstill in combat with his own teacher. So impressed was the Abbot with Wong Long’s new fighting style that he offered some suggestions to help Wong Long improve further on his new skills. Observing that Wong Long’s Mantis like hands were already very effective the Abbot noted his footwork still needed improvement and sent him back up into the mountains, this time to observe and absorb the footwork of Monkeys.

Our style, the Jade Forest system can be traced directly to Ching Yeung, four generations removed from Wong Long. Ching Yeung was the Abbot at the Wah Lum Monastery in Ping To district in Shantung Province. In the early 1900’s an accomplished martial artist by the name of Lee Kwan Shan sought refuge in the monastery. Already skilled at his family style, the Tam Tui (Seeking Leg), system, Lee Kwan Shan committed himself to an extended study under the guidance of Abbot Ching Yeung. After completing his studies Shan left the temple and resettled in Sha Cheng village, also in Shantung province. There he combined what he had learned from Ching Yeung over the previous ten years with his own Tam Tui family style, rendering a new system of Kung Fu. This became known as the Wah Lum (Jade Forest or Flourishing Forest) Tam Tui (Seeking Leg) Bak Tong Long (Northern Praying Mantis) system.

According to legend, there once lived five brothers in twelfth century China, their names lost to posterity. Each brother agreed to spend twenty years traveling and training at different temples. At the end of that time they were to regroup and analyze what they had learned. Only after careful evaluation and research did these brothers develop what is known today as the Bak Sil Lum system of Kung Fu. This system came to be one of the most effective and enduring styles taught at Shaolin.

The most visible proponent of this system was the famous master Gu Yee Tsang, circa 1920. Master Gu was widely known for his Iron Palm skill and reputedly was able to break any one selected brick in a waist high stack. Following the disastrous Boxer Rebellion in China, martial arts fell out of favor. Master Gu was active in rebuilding interest in the arts through various demonstrations and feats of Kung Fu power. Gu’s top student was Yim Sam Wu. Wu propagated his Bak Sil Lum in Hong Kong where, in 1950, he accepted Kwok Wei Chan for studies. After ten years of intensive training Kwok Wei Chan emigrated to Brazil to teach Kung Fu in Sao Paulo, where he is regarded to this day as the Father of Brazilian Kung Fu. A student of Chan’s, Chin Bing Chung, mastered the art under his guidance and brought it to Boston in the early 1970’s. In 1974, John Loupos, already a martial arts teacher at the time, was introduced to Master Chin and began his own studies at Bak Sil Lum.

Before a year had passed Sifu Chin asked John Loupos to accompany him to a warmer climate to open a new school. After several years with Master Chin, Loupos returned to the Boston area to open his own Bak Sil Lum school. More than 40 years after completing his studies with Master Chan, John Loupos continues to teach Bak Sil Lum and other styles at the Jade Forest headquarter location.